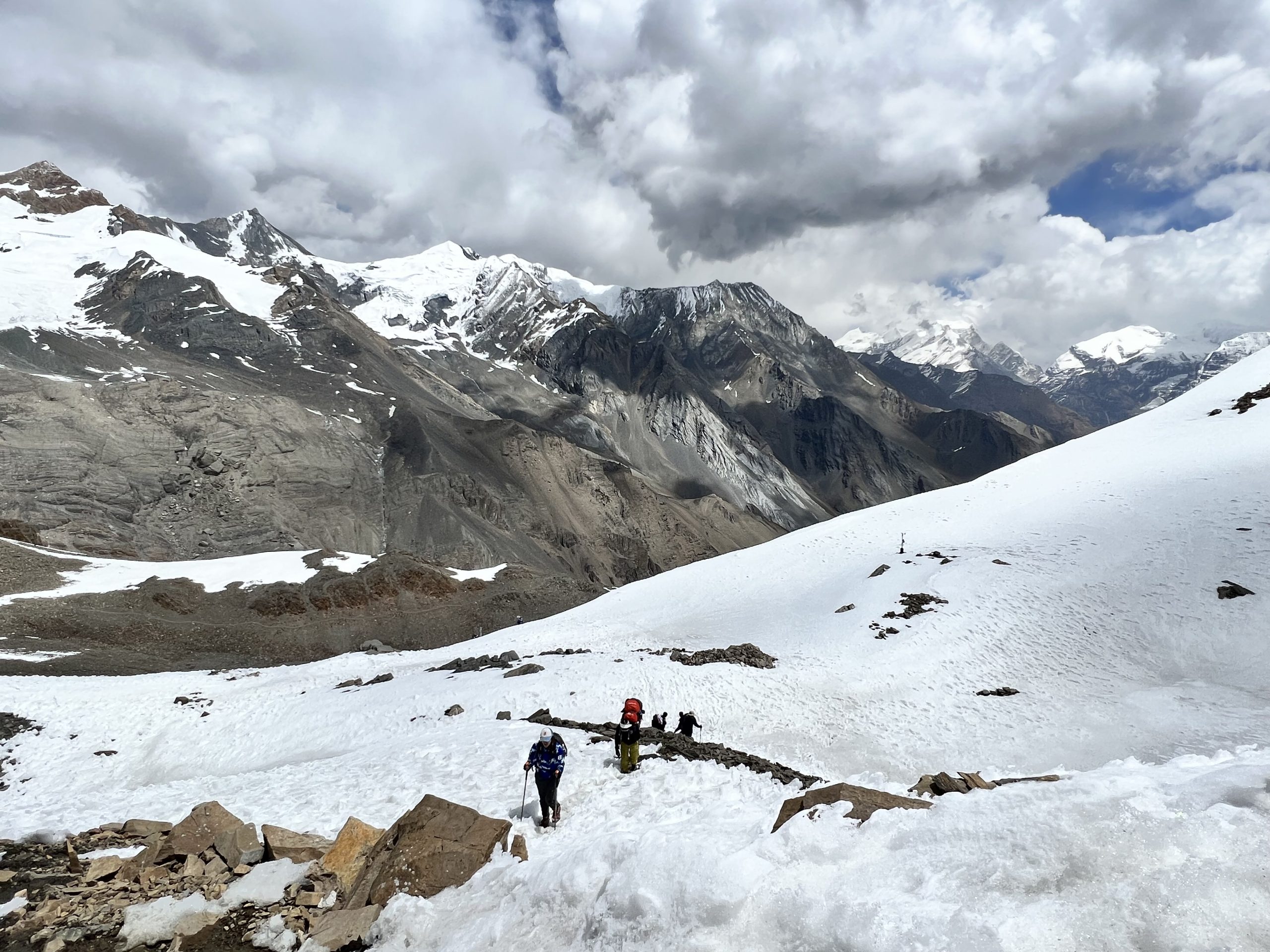 Saribung Himal is located between the kingdom of Mustang and Manang border across the holy lake Damodar Kunda. Peak has been newly designated for remote mountaineering and expedition in the Annapurna Conservation Area of ​​the Annapurna region. The Nar Phu Valley is Tibetan Khampa inhabitants on the hidden side of the Annapurna circuit trek route. Saribung Trek is totally wilderness destination for adventure and nature lovers. The Saribung expedition require multiple special permits. The Saribung Route and Tiri La Pass are technically tricky, because of lack of acclimatization, un-sure planning and losing the yak walking trails between Luri Gompa to Nar Phu Village. Mount Saribung is 6,329m high. The Saribung Peak expedition is important among trekkers for its challenging passes and great camping experience.

Main Features of Saribung Expedition are:

The Spring and Autumn seasons are good for speeding up Saribung Peak. During the Autumn season, the weather, scenery, and celerity is gorgeous. The bright peaks, colorful Himalayan rice, friendly and smiling Tibetan Buddhists, and yak caravans around the village are very interesting.

Due to the altitude, climate and remoteness of this area, it requires more training and preparation than other mountain peaks in Nepal. It most often straddled dry, rugged terrain and glacial motion modes, complete with climbing equipment. Required to set up a tall camping tent for mountaineering. From the summit of Saribung, you can cover parts of Peri Himal and Himlung Himal, parts of Mt. Tibet, and the arid landscape of the Kingdom of Mustang. After climbing the summit, you will enter another hidden valley called Nar Phu. A completely secret valley with ancient monasteries, colorful stupas and barley fields. Savor one of the most beautiful landscapes in the rain-shadow of Mt. Dhaulagiri while treading along the trails to the long lost kingdom of Lho-Mustang.

Upper Mustang is restricted region for foreign travelers and hence the trekkers to Mustang area need to obtain the special permit. The special permit costs the US $ 500 for the first ten days and 50 dollars per day for additional days.  trek in Nepal. It caters to the outstanding views of colorful mountains, which have interesting myths attached to their colors. The Mustang trek also offers the unique culture of people of Lo-Manthang (Capital of Upper Mustang) and the Tiji Festival. The Tiji festival will be celebrated in May/June full moon time of every year.

Mustang Trekking starting point is the most popular touristic town of Nepal, Pokhara. The scenic flight from Pokhara takes you to the airstrips of Jomsom from where the real trek begins. Treading along the trails of Lower Mustang in Kali Gandaki Valley, the trek goes through Kagbeni (the borderline from where the restricted region of Upper Mustang begins). As the trek goes beyond Kagbeni, it begins to cater to the landscapes, which are dramatically barren yet so beautiful. As the Mustang trek goes closer towards Lo-Manthang, the trekkers get to see the sky burials in the caves. It represents ancient death rituals of the people of Upper Mustang, who migrated to the region from Tibet centuries ago. At Mustang the ruins of the ancient palaces of the king of Upper Mustang are a primary highlight. The places in close proximity of Lo-Manthang highlight fascinating remote villages and ancient monasteries.

The other highlights of Upper Mustang Trek include the incredible Himalayan panorama of Mt. Dhaulagiri, Annapurna, and Mt. Nilgiri among others. The spirituality of Buddhism can be observed in the monasteries like Chhairo Monastery and Ghar Gompa. Similarly, the trek also caters to the culture of Bons in the Monastery at Lubra Valley as well as Hinduism at the sacred temple of Muktinath.

Mustang Trekking is the best during all the time in a year even in Monsoon season as entire Upper Mustang lies in a rain-shadow area in the trans-Himalayan mountain region.

Upper Mustang Tiji Festival is a 3 days-long festival celebrated in the – Upper Mustang, Lo-Manthang. The mysterious Buddhist festival one of the main celebrations in the upper Mustang. In the year 2023, They celebrate the Tiji festival from 07th May till 10th May. However, day 2nd and 3rd is more colorful with the various mask dance performance by Buddhist monks and lamas. Sign up today if you are interested in this festival trek to Mustang and for detail please Read details/blog about the Tiji festival.