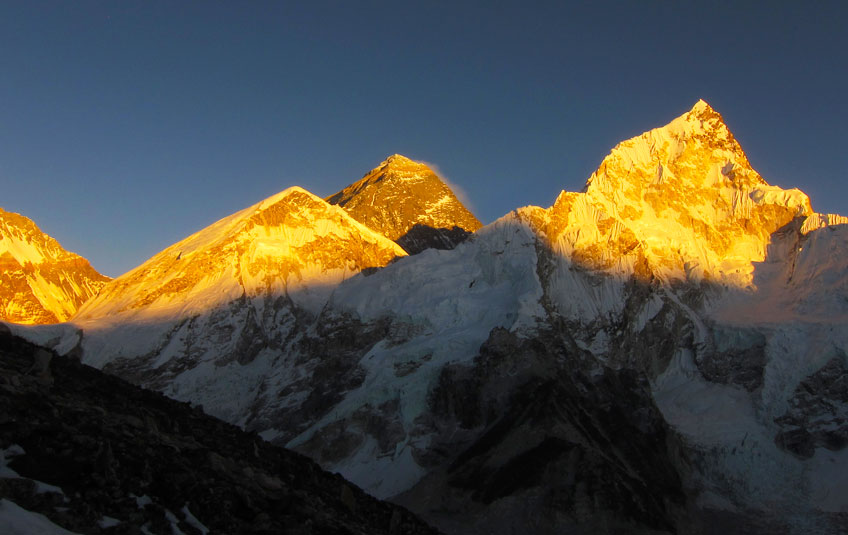 Climb the Mt. Everest with Next Level Service

Mt. Everest is the final step tallest summit in the earth.  Mount Everest has got various titles, the goddess of snow and the roof of the world, the third pole. And locally known as the Sagarmatha in Nepali.

The highest peak in the world has been founded and recorded by a (British surveyor) Gorge Everest in 1856.

After the first successful attempt of Mt. Everest in 1953 AD by Nepali Sherpa Tenzing Norgay and New Zealander Edmund Hillary, Mount Everest becoming the most thrilling adventure destination for mountaineering and climbing community in the world. Since the first attempt date until today, every year, there are numbers of top extreme climbers from the world attempting this mountain with Experience Nepali Sherpa climber support.

During the climbing period, many of popular climbers, Sherpa’s and some crews member of Everest Expedition, they disappeared and lost their lives in the Everest area. Because of natural disaster, avalanches, storms, and lack of oxygen and poor physical condition.

Every year, there are new records recording in the Mt. Everest summit. Many people climbed without oxygen, get married on the top of Everest, 8 hours speed runner summit, and more and more. Thus, these days, it is not only a challenge but also a good opportunity to make a personal record and performance in Everest.

Mt. Everest lies between Tibet (Autonomous zone of China) and Nepal international border. Basically north face of Mt. Everest lies in Tibet and the other three faces are on the Nepal side. There are two popular climbing routes which is one from Nepal Everest Base Camp (known as south Col route) and another is Tibet Everest Base Camp (northeast route). From both of the base camps, people can participant in Climb Everest.

The most popular climbing route to Mt. Everest is from Nepal. Although, some climber choose from Tibet side because of climbing length, cost and logistic access. Because of best trekking from Lukla to Everest Base Camp along the stunning villages, trail and the Temples to get more acclimatize, almost 90 percent climber choose Nepal to climb the Mt. Everest every eyar.

By taking Nepal side climbing route, climber got great high altitude acclimatization during their hike up to Everest Base Camp from the low altitude level Lukla (2800m)

Everest climbing Route from Nepal Side

In the record, every year more climbers choose the Nepal side (South Col route to climb Mt. Everest ) The South Col climbing route is more expensive than then Northwest route. Because of permit costs by different countries, Nepal has taken more dollars then China. Climb Mt. Everest from Nepal side cost $ 11000 and $ 8000 from the Tibet side. This cost is only for a permit. Other climbing services, personal climbing equipment, Climbing Sherpa fees, and daily wages, high altitude porters cost, high altitude food, logistic services, camping gears, and rope fixing to the top of Mt. Everest Summit are an additional cost required.

There are additional costs required for extra filming, Use for satellite phones, Skies, Snowboarding, and other adventure activities. All the illegal activities, kinds of harassment, and culturally and natural activities damages are forbidden during the Climbing period of Mt. Everest. The climber is not allowed to left the trash in the climbing routes and Summit during the climbing and expedition period. Before getting the climbing permits, climber required to pay for garbage deposit to the Tourism Department of Nepal, if climber brings back all the trash from the expedition, the money is refundable.

Climbing Mt. Everest is an ultimate quest for the climbers to get summit successfully with NFH. Our experience Everest climbers, base camp, and higher camp support team, the up to date logistic service and permit processing format, you are always on safe hand.