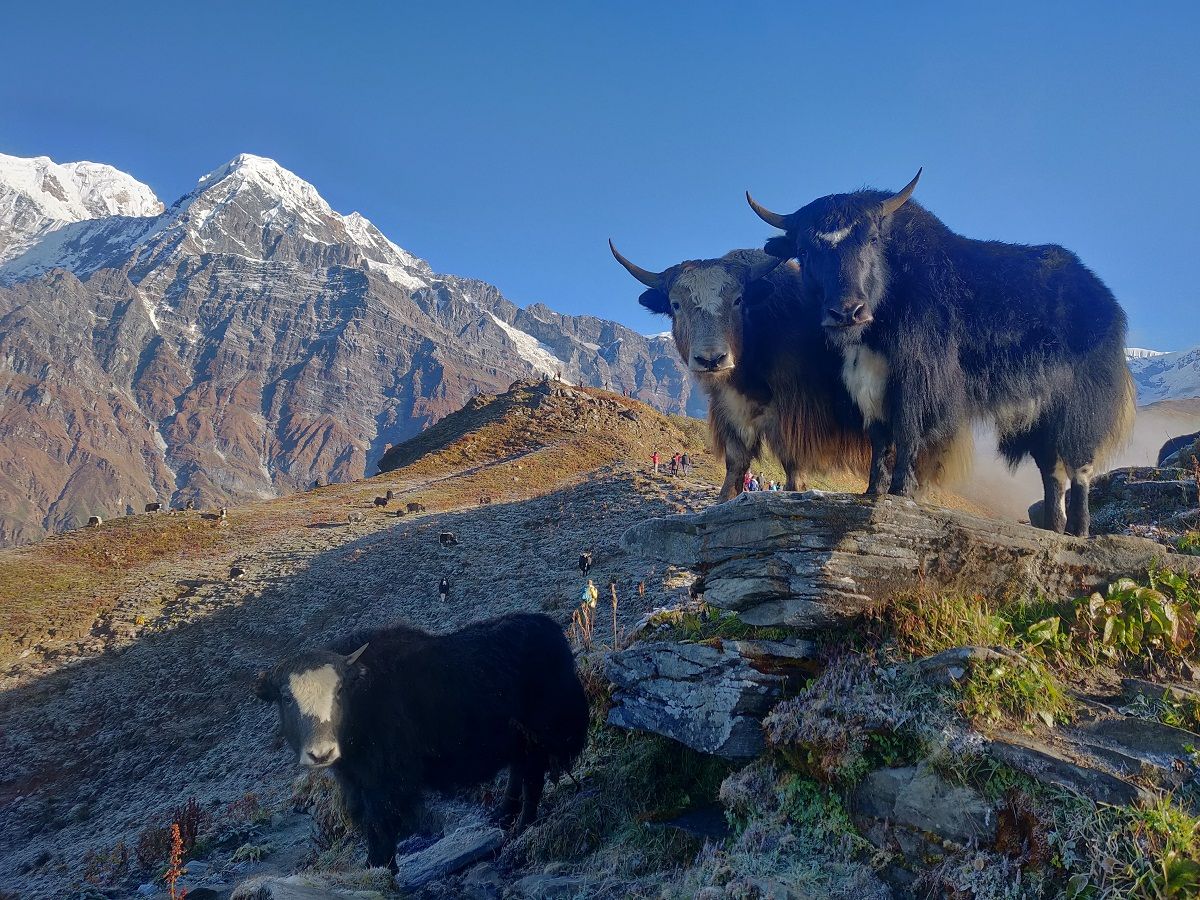 Upper Mustang Overland Adventure, an amazing ride on four wheels drives to reach at scenic and picturesque to Mustang known as Lo country. Blessed with awesome scenery of snow-capped mountains, eroded high cliffs and canyon of varied impressive colors which makes this area of Upper Mustang one of most photogenic place in Himalaya.

The Kingdom of Mustang situated Nepal Far North West Himalayan in between high massive Dhaulagiri and North West of Annapurna Himalaya range of mountains with Damodar and Bhirkuti peaks, the country around Upper Mustang actually known as Lo, which is an extension of Tibet vast South West plateau.

Upper Mustang overland adventure, where it is possible since the road been constructed since last few years, the area of Upper Mustang remained closed for outside visitors for many decades, now it is open since last twenty years back for travelers to see and immerse in its beautiful scenery and traditional villages enriched with colorful culture and old heritage.

Upper Mustang Overland Adventure makes you feel as you are in Tibet with similar dramatic unique windswept and arid landscapes including its traditional life and Buddhism religions similar to its neighbors across the border.

Upper Mustang also located on ancient Trans-Himalayan Salt Trade Route and Caravan Trail of Nepal and Tibet where road to Tibet and Karo-la pass a mere distance from Lo-Manthang, once a walled kingdom of Upper Mustang and of Lo country.

Upper Mustang was once a forbidden kingdom where it was ruled by Raja (King) of Mustang till last decades, before Nepal become a republic nation, where one can visit the walled kingdom of Lo-Manthang and the fort palace with tour of many monasteries of great interest.

Lo-Manthang the largest village almost a town / city with more than 150 houses with number of residential quarters for priest, monks and lamas, the houses closely packed with palace and monasteries situated on the bottom sections with vertical parts of L-shaped houses.

Beyond its walled village includes school, health post, police post and several important chhorten are located outside the walls to the north of the gate and east of monastic areas of this impressive village.

Lo Manthang, village is well-off and maintains strong sense of community where people call themselves as Lobas, people from Lo.

Upper Mustang Overland Adventure begins with swift short flight from beautiful touristic city of Pokhara, during air breathtaking panorama of Annapurna and Dhaulagiri mountain range on both side of the plane window.

After a short early flight from Pokhara landing at Jomsom, the headquarter town of whole Mustang district, where the airport and town located above the shelf of Kaligandaki River with time at Jomsom for refreshing breaks, before starting marvelous Upper Mustang Overland Adventure.

Riding on four wheel jeeps or land-rover, heading towards Kagbeni village, the door to Upper Mustang and beyond to Tibet border, where travelers requires special permission and extra fees to enter into Upper Mustang area.

Drive continues from this interesting Tibetan like village of Kagbeni, where ride leads into several interesting villages of Chele or Tsele, Geling, Tsarang (Charang) and then into the walled old kingdom at Lo-Manthang located at the height of 3,700 m.

To reach at Lo-Manthang, where drive leads above few high passes with Nyi- La above 3,950 m high with spectacular views of the country dramatic landscapes with snow-capped peaks of Mustang Himal, few trees exists like Poplars and willow trees within village areas includes well maintained farm fields of mustard, buckwheat and barley the staple crops of Mustang region.

While at Lo-Manthang enjoy a rest day to explore this exciting and mystical country visiting places of great interest like tour of monasteries of Namgyal Gompa, Champa Lakhang (God House), Red Thubchen Gompa, Chyodi Gompa and the great Entrance Hall with special permission to visit into palace interior.

After a great enjoyable time at Lo-Manthang with its impressive culture, custom of Buddhism religion with simple traditional farm life, the drive back on the same route with few alternative changes to reach back at Jomsom for scenic short flight to scenic and beautiful Pokhara, renown and popular tourist destination.

To travel into Upper Mustang March to June with September to November are the best time and season for the ride and visit to Upper Mustang, depending upon your holiday duration for Nepal where one can travel in July and August as well if it is the only time you have.

As Upper Mustang lies in the rain shadow like Tibet where monsoon clouds and rains are blocked and obstructed by high chain of Himalayan mountains, that is why Upper Mustang and as well Tibet a dry and arid country with less precipitation from rain fall.

March to May most of the day is clear with dry and cool air and clear for mountains and its landscapes views, while late afternoon can be cloudy with less chances of rains and snow.

Monsoon time to July to mid September the country will be green due some moisture from monsoon clouds and with some light rains, September to November months most of the day clear for views and enjoyable drives.

Can be cold in the morning and night time with some chances of snow during end of October and November months, where most of the Upper Mustang people migrate to lower warm areas of Nepal and India to escape from freezing cold climate from end of November till late February months.

Upper Mustang can be reached with drive straight from the capital Kathmandu with overnight stops in Pokhara city and Beni town then follow Kali-Gandaki River upstream through Tatopani village (a place with natural hot-spring), Ghasa (where Mustang area begins), Lete, Kalapani, Tuckuche, Marpha unto Jomsom and continue beyond to Upper Mustang.

Shortest way with short flight to Jomsom and back to Pokhara, or one can take a flight to Jomsom and further to Upper Mustang and then continue drive towards Pokhara via Tatopani village and Beni town, where drive leads within world deepest gorge of Kali-Gandaki River.

The deep gorge of Kaligandaki which is Ten Times deeper than Grand Canyon of USA, formed by the big drops of world highest Mt. Dhaulagiri the 7th highest and Mt. Annapurna I, the tenth highest in the world. The Kaligandaki River deepest gorge located near Lete and Ghasa village sandwiched between the high mountains.

Culture and People of Upper Mustang:

The people of Upper Mustang interwoven with strong Tibetan Buddhism religion and culture, been on strong trade with Tibet where all salt and wool trade took place within Kali Gandaki, and unto Lo-Manthang and this brought a substantial amount of economy to this great village town.

Former Mustang raja’s palace stands an imposing 4 story building in the hub of the large village like a medieval period city. It was home of former Raja (king), Jigme Parbal Bista, and the Rani (queen), from the noble family of Lhasa and Shigatse in Tibet.

Upper Mustang area highly spiritual  which you can witness around the village and its monasteries on route and as well at Lo-Manthang within Namgyal Gompa, Champa Lakhang (God House), Red Thubchen Gompa, Chyodi Gompa and the great Entrance Hall with special permission to visit palace interior.