Nepal Tourist Visa on hold and Canceled from Covid-19 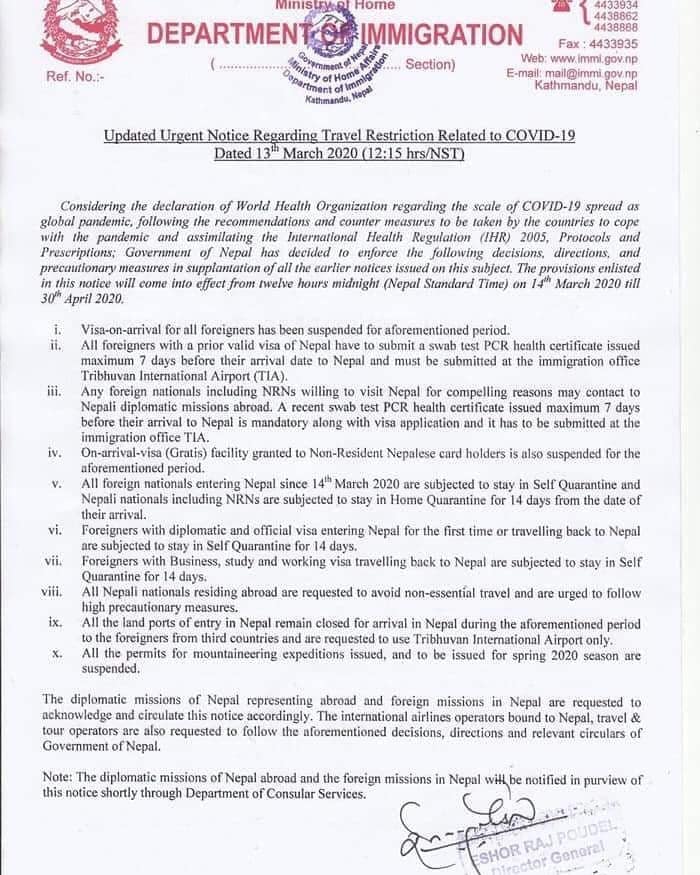 Emergency  Cabinet meeting of Government of Nepal, announced that it would cancel and on hold of all tourist visa to Nepal and the season Expedition permits including Mt. Everest, because of COVID-19 effects.  The rules effective from 14th of March 12.00Am till 30th the April 12.00Am. 2020.  Ministry of Finance and Information Mr. Khatiwoda says.

Neighborhood  China is one of the worst and first Covid-19 victim country has already ban for Mount Everest Expedition permit for season 2020. And India has also ban tourist for a month from 12th March.

The Nepal visa suspension, which excludes diplomatic and official and Emergency person.  In case of emergency, any foreigners wishing to come to Nepal will need to submit a medical certificate declaring that they are free of the COVID-19 while applying at Nepal’s Consulate in their respective countries. The government has also decided not to issue visa for tourists entering Nepal via Land (Open border from Indian side) routes.

According the Nepal Government official, all the spring Himalaya Expediting, Mount Everest Climbing permits and other peaks permits have been cancelled for this season. The decision effectively puts an end the spring climbing season, which is most success and attempts season of Everest Summit.

All the permits can be obtained for next year season if somebody already got the permit. The Nepal government earns about $ 4 million by issuing Everest Climbing permits every year and $1 million around from the others mountain expeditions. Thousand of Sherpa Climbers, Guides, Airlines, Helicopter companies, Local guest houses and hotels, porters and Trekking tours company get jobless in the high season of Trekking and Mountaineering in Nepal. While they awaits long time for good season after the massif earthquake in Nepal.