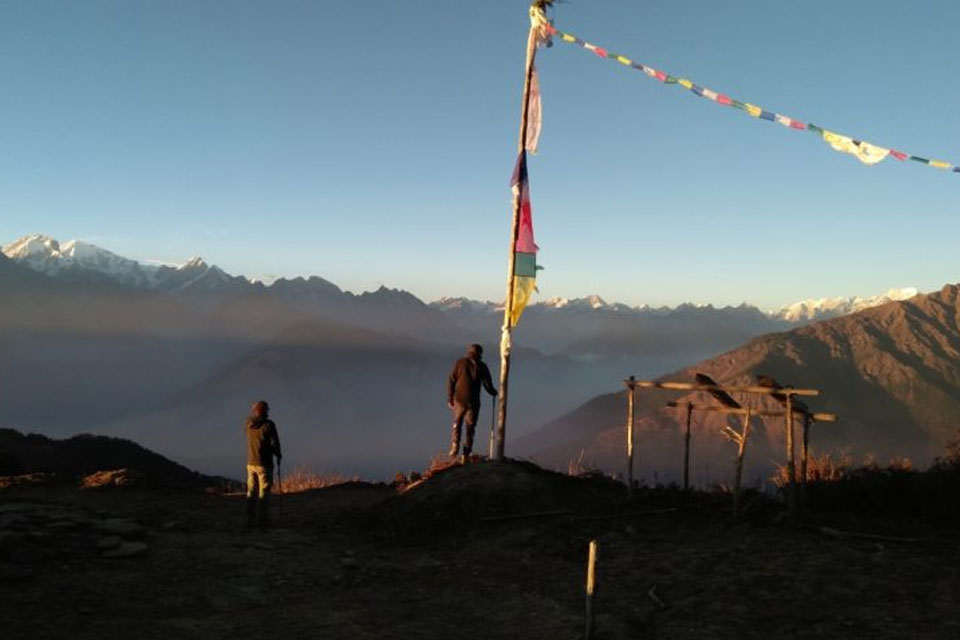 Kyanjin Ri around Langtang Himal, where adventure leads you at the highest view point on top 4,700 m and 15,420 ft high, with spectacular panorama of whole Langtang Himalaya range of peaks that extends towards Jugal Himal range with Dorji Lakpa in the east with massive Ganesh Himal within west direction.

A beautiful and pleasant walk that leads you to high areas of Langtang Himal and its scenic green valley at Kyanjin village located at 3,749 m high in the midst of sweeping views of mountains of Langtang Himal within Nepal Central Himalaya.

A short and scenic adventure of a week or more where all age-groups and various travelers can join in this marvelous walks, an exciting experience for beginners, expert trekkers and all alike interested in country and Himalayan walks.

As view extends towards as far towards Jugal Himal terminates at Dorje Lakpa (6,980m / 22,929 ft) in the east horizon, where Far East around upper meadows of Langtang ends into massive mountain walls, forming frontier and border between Nepal and Tibet.

In spring time in the month of March to May the hills are alive with riots of vivid colors from the wild flowers in full bloom making this whole place a magic, especially the rhododendron (national flower of Nepal) with varied species from trees to bushes of azalea.

For botanist, naturalist and flower lovers a paradise on earth within Central Himalaya and the closest mountain range from the capital Kathmandu city, where an interesting overland drive of some six hours reaches you to the trekking points at Syabrubesi village after driving past Dhunche the major administrative town of Rasuwa and Langtang district.

Walk beings heading through nice, lovely Tamang villages and into river gorge covered with deep green forest with bamboo stalks which makes a nice habitat for rare and endangered Red Panda which is seldom spotted on route walks to Langtang valley and Kyanjin.

As walking continues into forested areas and then coming to nice clearing at Langtang village, few years back a large village with many houses serving as lodge and inns to travelers, at present slowly coming back to normal life, after a huge earthquake of 2015 April and May months that destroyed nearly all the houses.

However, the villages still under construction adding more nice hotels and lodges as it was in early days before the earthquake, at Langtang village enjoy exploring the local life of Buddhism religions with similar culture of Tibet.

From Langtang village a short climb to reach a wide open valley of Langtang at Kyanjin village surrounded by amphitheatre of peaks, where one can stay in one of its lovely lodge with rooms facing views of mountains.

At Kyanjin enjoy rest and free day with hike to Kyanjin Ri hill top adding more heights of the adventure with breathtaking panorama of Central Himalayan peaks includes mountains of Jugal Himal in the east horizon.

Langtang Himal areas populated by Tamang the hill and mountain people of high Nepal Himalaya, where Tamang tribes are found within Langtang-Ganesh Himal and Kathmandu Valley Rim. Tamang people are of Buddhism religions, and similar culture to Tibetans, and expert in making handy-crafts, with main occupation as farmers and cattle herders since ancient times.

Tamang are fun loving people enjoy in merrymaking with folk songs and dances that you might witness during festive occasion on this wonderful walks to Kyanjin-Ri around Langtang Valley.

Seasons to visit around Kyanjin-Ri and Langtang Himal

Around Kyanjin Ri and Langtang Himal areas can be visited nearly all months of the year, depending upon your choice and holiday duration in Nepal for this trek to Kyanjin Ri within high Langtang Himal.

June to mid September not advised for the trek due to heavy monsoon rainy months, where nearly all places around southern Himalaya will be wet with rains, can cause landslides in some section of the road on route trekking.

March to May will be a great time to visit as most of the days clear for views of mountains with wild-flowers in flowering season with colors the whole hills and valley with blankets of miniature flowers, including rhododendron, magnolia, Meconopsis (Himalayan Blue Poppy) and other wild flowers.

Sometimes during these months can get cloudy in the afternoon times obstructing the views of mountains, but most of the morning till mid-day will be fine and clear for views and pleasant walks.

Mid-September to December as well January and February will good for walks the autumn seasons from Mid-September to late November where day is fine and clear with cold temperatures during morning and night time as well in shady places.

December to mid February winter months mainly clear with short light hours where sun reaches after 7 a.m. and sunsets by 5 p.m. will be freezing cold outside the lodge with chances of snow sometimes as per altitude wise.

Villages on route to Kyanjin-Ri

Langtang village at above 3,296 m before Kyanjin with many good lodges and then at Kyanjin located at 3,749 m the highest place for overnight stops.